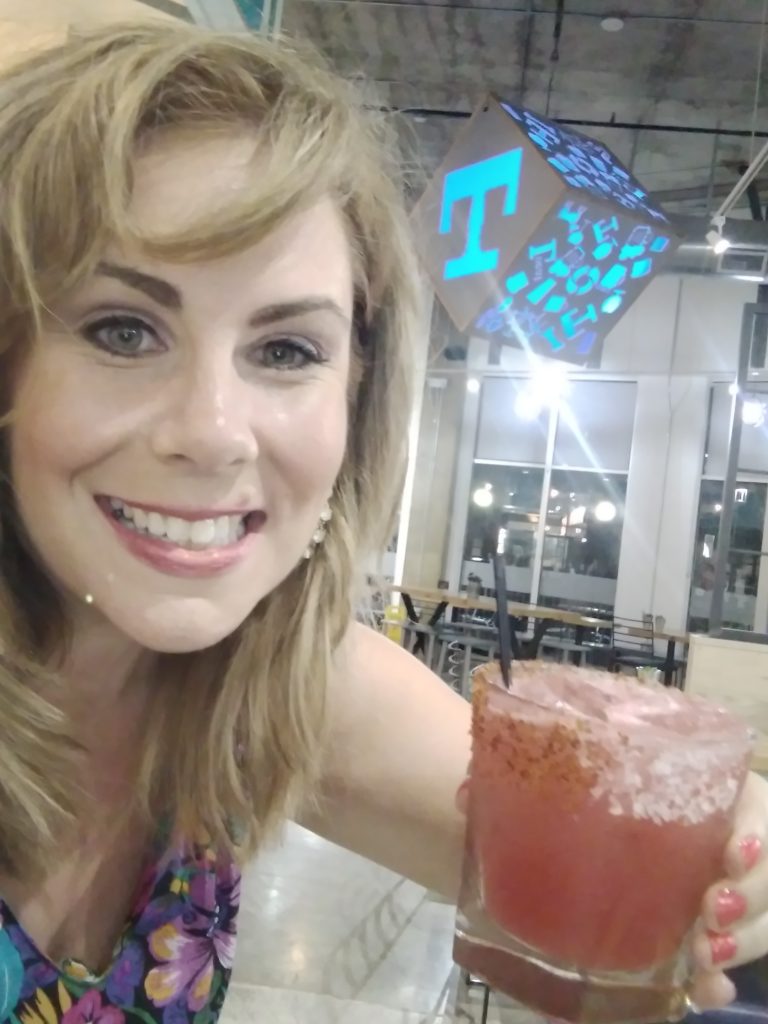 Whether you’re looking to try or succeed, there’s always a chance at Toasted you might just get toasted!

The Restaurant & The Owner

Toasted Coffee + Kitchen opened its doors in the Lowest Greenville area of Dallas back in November of 2016. Following suit, their Fort Worth location (in Crockett Row) opened in October of 2019.

Owner Bob Sinnott had always had the intention of creating a regional chain. Having grown up in Arlington, the go-between town through Dallas and Fort Worth, his time was spent more in FW rather than the Big D.  Stating that he’s always been partial and more drawn to the vibrant downtown and West 7th districts of Fort Worth, it’s no wonder he chose it as his second location for the very profitable new business of Toasted.

As the sole proprietor of both locations, Bob is no stranger to restaurant life. Having worked underneath other people for 30 years in the restaurant industry, he decided to throw caution to the wind and invest in his own business. And what a great decision he made!

At 55 years old, his past experience in the restaurant industry included well-known establishments like Chili’s, On the Border, Snuffer’s, Tony Roma’s, and Taco Bueno – just to name a few! He explains how he got his start.

“After graduating with highest honors with an accounting degree from The University of Texas in Austin, I began my professional career at KPMG, where my clients primarily consisted of national restaurant and retail chains. Following KPMG, I worked in financial roles at several hospitality companies. Including Brinker International, Inc., owner of several restaurant chains, Ashford Hospitality Trust, Inc., owner of name-brand hotels, and CFO of Silverleaf Resorts, Inc., a publicly traded resorts company. After leaving Silverleaf Resorts in 2011, I was CFO of three restaurant companies, including Romacorp, Inc., which owns Tony Roma’s, M∙Crowd Restaurant Group, Inc., which owns Mi Cocina and Taco Diner, and Firebird Restaurant Group, LLC, which owns El Fenix, Meso Mayo, and Snuffer’s.

I decided it was time to start my own restaurant concept. But I didn’t have an original idea. Tacos, chicken, and BBQ were seemingly done to death. Then I read an article about the west coast artisanal toast craze. After touring toast/coffee concepts in San Francisco, I knew Dallas needed to expand that idea to be a meal destination spot as we lack San Francisco’s foot traffic. So I ultimately combined multiple trending concepts. Artisanal toasts, larger coffeehouses, barista-bartenders, fresh ingredients, in-house bakery, & coworking/officing. In my mind, it’s a concept of the future … a true Starbucks/full-kitchen hybrid. We turn tables at mealtimes but the restaurant is never empty between meals. You will always see guests studying, meeting, snacking, or enjoying a beverage at any time of day or night.”

The Style & The Brew

While Toasted Dallas may be located in a building which was constructed in the 1920s, their Fort Worth location is a bit different. Dallas’ Lowest Greenville spot has a lot of industrial vibes going, but Fort Worth’s has a much cozier charm. With a much more modern feel, they also offer a very spacious dog-friendly patio.  Additionally, Fort Worth’s location also has four floors of residences above it and has endless parking available. Also, you should be excited because Toasted validates parking in any of the Crockett Row parking garages. So  you never have to spend a dime on parking!  And because Toasted Fort Worth is not located on a busy street, guests should bear this in mind when it comes to that validated parking. Located directly across from Crockett Food Hall – you’re sure not to miss them!

Toasted Fort Worth is in Crockett Row at West 7th in the heart of the West 7th entertainment district.  Just a hop, skip and a jump from downtown.  Located in a slightly more upscale demographic, the restaurant is open to anyone and everyone and is a comfortable place for people of all economic walks of life.

First, let’s start with the names of the dishes. They’re hilarious and quite clever. Take for example their ‘Hasher in the Rye’, or ‘Omelet it Be’. However, the funniest sounding dish I tried was the ‘Steakin’ Me Creggsy’.

Pretty much everything on the menu is creative in terms of name. But taste – oh my gosh. Well, you’ll just have to watch the video I created for you to find out just how amazing and delicious every single item I tried actually was.

Don’t leave the restaurant without trying their Chilaquiles Amigos! Possibly the best thing they have on offer (which is a difficult decision to make, as it was all the best food I’d had in a long time). The dish is a combination of scrambled eggs with assorted cheeses, mixed peppers, onions, tortillas, and green cilantro sauce with a side of black beans. Ugh. Even thinking about it makes me hungry.

Their brownie was not only spectacularly huge, but it was spectacularly delicious. The French Toast was some of the best I think I’ve had in my entire life, and the salmon lox on cream cheese was out of this world flavorful.

Their specialty of the house? ‘All I Avo Wanted’. Sliced avocados, jammy soft-boiled egg, pickled watermelon radish, alfalfa sprouts, ginger chili oil, black salt & pepper on 9 grain toast. Wow. That’s a mouthful. Both reading the description and eating it! Their most popular dish though is their ‘ Don’t Get Salty’ item. Again, an avocado toast, but a very different creation. I myself highly enjoyed this one. And their best-selling breakfast/brunch entrée is their ‘All-Day B.A.E.’ This dish consists of bacon and two eggs with queso fresco, avocado slices, and black bean spread over toasted rye, served with fruit.

“The primary menu for both locations is identical.  However, each location offers location-specific specials from time to time.  For example, Toasted Fort Worth has offered a TCU-themed toast called ‘Purple Haze.’”

And if you need some merchandise before leaving Toasted, they’ve got you covered.  They have recently finalized their retail offerings.  You can purchase logo t-shirts, coffee mugs, organic jelly, organic peanut butter, metal straws, Noble Coyote coffee, coffee beans  & multiple varieties of bread loaves at both locations now. Pretty exciting stuff. Which is why I went home with one of the best t-shirts I’ve ever had, and some very unique jelly…

To see their food menu, make sure to click here: www.toasted.coffee

It’s not just the coffee that they have available when it comes to liquids. They also have smoothies, juices, cocktails…and coffee cocktails. What now? Yes, that’s right. Coffee cocktails. For example, you might want to try one of their most popular drinks, which is the Cowboy Coffee. How do they make it? 2 oz. whiskey, 2 oz cold brew coffee, 1.5 pumps of syrup flavor of your choice, and some ice. Wow. An upper for the morning and a downer for the evening. Who says you can’t have your two favorite things (coffee and alcohol) at once? Perhaps this is the reason for their hashtag on Instagram being #gettoasted…

And those smoothies? Wowzer. Definitely try their strawberry and banana concotion which was my absolute favorite! That’ll keep your tummy happy for hours!

Don’t forget about their full bar either though – just like me, you can try to #gettoasted. Hence the hashtag…

And speaking of their cocktails, they’re pretty cool.  Both figuratively and literally. With fruit flavors galore, they put the fresh in ‘tail.

My Experience in Fort Worth

As the last time when I was at their lowest Greenville location, my experience at Toasted was fantastic. There are few restaurants that can impress a guest that much not just once but twice over. Overall, I prefered the cozy charm of the Fort Worth location over the more industrial atmosphere in Lowest Greenville. And while there were outstanding creations in Dallas, some of the different treats I tried in Fort Worth had me oohing and ahing all over again.

This time around my favorite two picks were the onion mushroom soup, and the “Always Sunny” items. “Always Sunny” it is prepared with high quality smoked sausages made from beef, pork, and a blend of spices.  And the soup? Oh dear Lord… it tasted like liquified, soup-style Thanksgiving gravy. It was sheer heaven. Made with a very flavorful blend of vegetable stock and herbs, caramelized onions and roasted mushrooms are then added to the pot. Wow. Unworldly delicious. 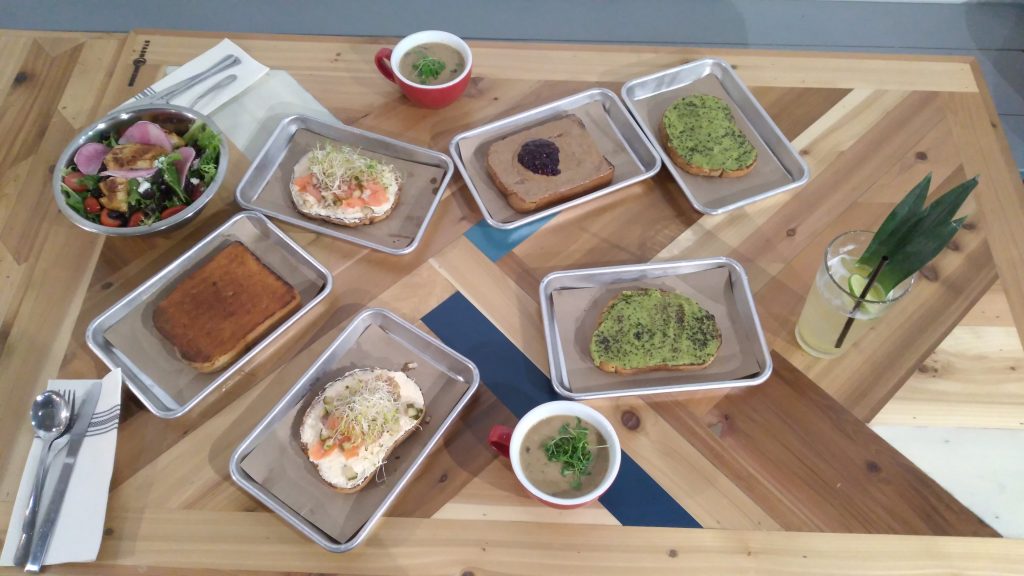 To see more photos of Toasted Fort Worth, click here

Toasted is happy to welcome visitors from far and wide, but do have a lot of regulars at their Dallas location as of right now. And who wouldn’t want to go to Toasted regularly? With the kind of incredible food they have, and the low prices they offer, it would be silly not to go often.

It would also be extremely foolish not to stop in to Toasted the next time you are in the greater DFW area. Near downtown, the restaurant offers the best breakfast/brunch menu items you will find in the area. So make sure to stop in as soon as you can to Toasted to get some of the tastiest treats you can find in Dallas. And when you do, make sure to let them know that Lisa sent you!